Wonder of wonder, miracle of miracles!

The last update I did–prior to my rehaul of the last two days–was last year. I added a couple of new book covers and an upcoming book event. The rest of the website went untouched, gathering the cyber equivalent of cobwebs. I cut myself an enormous amount of slack (something I’m normally not very good at doing) as nothing seemed important after losing Mom early 2016, and I was in increasing and debilitating pain due to what turned out to be bone on bone hip sockets.

Well, hey, now I’ve got titanium replacements and while I’m still grieving over Mom’s death, I’m feeling more like myself again. Able to leap tall buildings in a single bound…or at least walk a few miles at a time with my dog and lift weights at the gym. I also finished up two books that were past deadline, got new deadlines for the next two books, and caught up on some other things that had fallen to the wayside.

One of these items (my website) required a lot of love. I haven’t written a blog post since 2015 because I didn’t want to look at all the pages that needed updating. We call that “avoidance.” So I finally dove in, page by page and I think it’s up to date. It’s at least to a point where blogging doesn’t intimidate me anymore. Which is a good thing ’cause I have a lot of cute cat and dog pics to share!

I’ll start with this one. 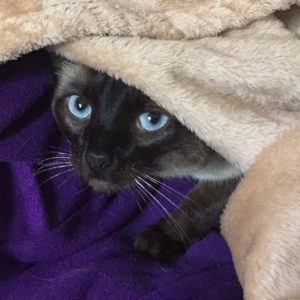 From the Marsal Lyon Literary Agency:  SOLD! Dana Fredsti’s LILITH, in which successful actress and stuntwoman Lee Striga finds herself with an unwanted second job: demon hunter, paying off an ancient family debt in order to free her ancestor, Lilith, Mother of Demons, imprisoned centuries ago by a vengeful god, in a 3-book deal.

I’m delighted to be working with Titan Books and my favorite Dark Editorial Overlord Steve Saffel again! Many thanks to my agent, Jill Marsal, for brokering the deal and to both Jill and Steve for helping refine the various incarnations of the pitch and the outline. 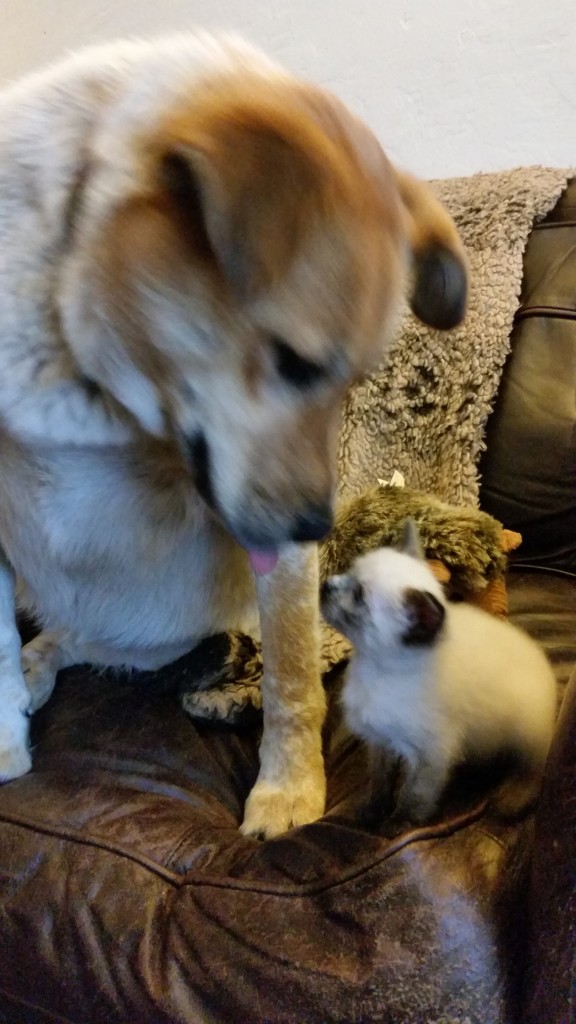 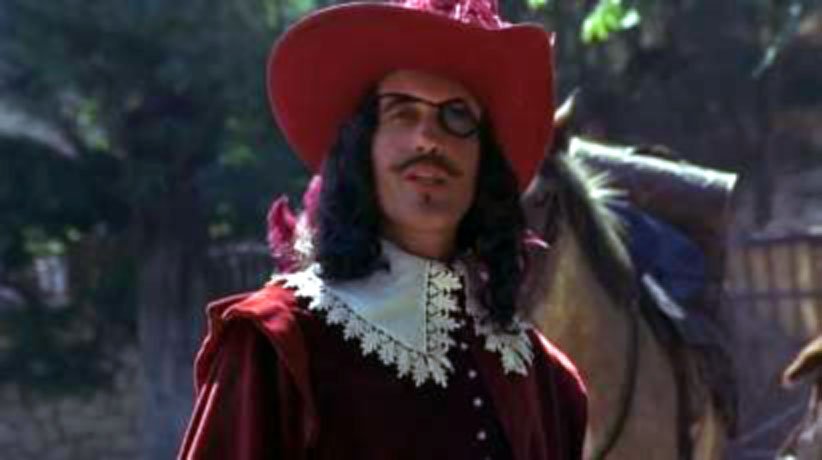 When I was young (back in the mists of time and the days of yore when adventure was in the offing and there were no cell phones, TV remotes or personal computers), I developed a major crush. Like many other pre-teens at the time, I fell hard for a celebrity.  Unlike many other pre-teens at the time, I didn’t fall for a teeny bopper idol like David Cassidy, Shaun Cassidy or Leif Garrett (although I did think Davy Jones from The Monkeys was kinda cute).  No, when I fell (and fell hard, with the kind of obsession that only pre-teens and stalkers can summon), it was for an older man.  A much older man.  A man 40 years older than my 13 year old self, British actor Christopher Lee. 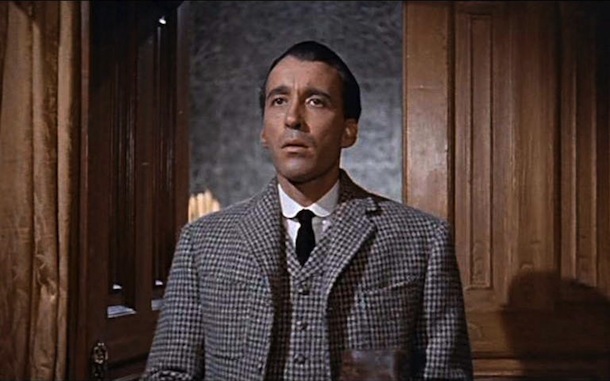 Sir Henry in Hound of the Baskervilles. Only Christopher Lee could make fainting seem so sexy!

I can’t quite remember when I first saw him. It might have been in one of the wonderful Hammer horror movies where Lee played Dracula (bite me, pleaseohplease, bite me!) or his turn as the fainting Sir Henry in Hound of the Baskervilles.  I watched a lot of horror movies from an early age.  But the movie and the role that really captured my young imagination (and slowly developing hormones) was The Three Musketeers, directed by Richard Lester, and starring an awesome cast.  As fond as I am as Gene Kelly as D’artagnan, there will never be a better four musketeers than Michael York, Oliver Reed, Frank Finley and Richard Chamberlin.  but the awesome sauce on top of it all was Christopher Lee as the one-eyed villain Rochefort. 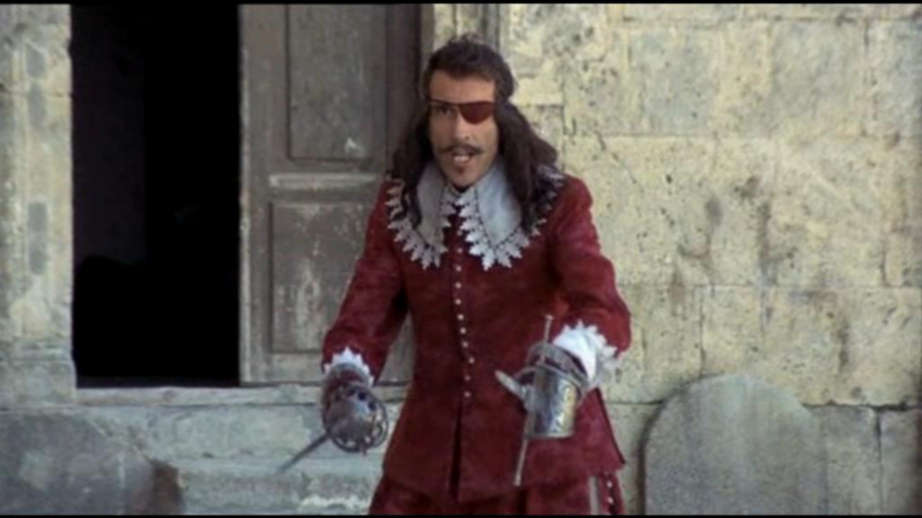 “Be advised, Gascon. Turn and run.”

Oh man… he could sword fight.  He had this amazing deep and resonant voice. He had an eye patch… and he started my fixation with men in cavalier garb. Christopher Lee is the reason that almost every significant male interest in my life either knew how to sword fight or was willing to learn, and also didn’t mine dressing up in boots, breeches, and full sleeved white shirts.

I wanted to be Milady de Winter ’cause she had a thing going with Rochefort. But I also wanted to learn to sword fight.  No damsel in distress role for me.  With my friend Cindi, I started writing Three Musketeers fan fiction with myself as Constance DuVallon, sister to Porthos.  She of course, was taught to sword fight at a young age because that happened all the time back then, right?  Well, in my world it did, and that was all that mattered.  I filled a dozen little notebooks with my fantasy life as a 17 century noblewoman who knew how to sword fight and who just happened to be Milady’s half sister or something like that, and who just happened to catch the eye of Rochefort (the eye… get it?  Hahahahah!!! okay…). 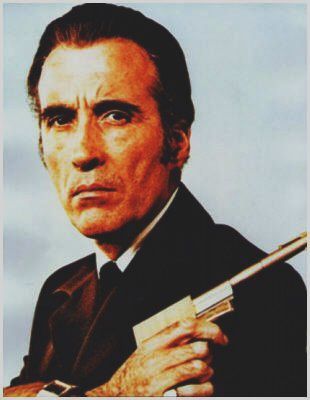 It didn’t stop with Rochefort, though.  Once my infatuation well and truly set in, I would watch anything and everything Christopher Lee was in.  I’d scan the TV guide every week for his movies and when I found the listings, I’d cut them out and save them in a cigar box where I kept all my special ‘stuff.’  I must have cut out fifty or so over the years. I bought horror movie coffee table books, collecting as many as possible so I would have a diverse selection of Christopher Lee pictures and bios.  I’d scan the photos for sale at conventions such as ComicCon for eight by tens of my hero.  I wondered why anyone would choose Roger Moore’s bland James Bond over Christopher Lee’s devastatingly sexy Scaramanga “the Man with the Golden Gun.” I also conveniently ignored the existence of his wife, who I’m sure was a wonderful woman and probably a bit more age appropriate.  She just wasn’t me.

The best present I remember receiving as a child was one Christmas when I found a Rochefort doll sticking out of the top of my Christmas stocking. My sister Lisa had taken an Ivanhoe action figure and hand made a Rochefort outfit for it, including hat with a stitched black yarn “wig” attacked inside.  It’s not included in this picture because one of the cats dragged it off and I hid it away for safe-keeping, evidently in a place so safe that I can’t find it now…

My family was also amused by my infatuation with a man forty years older than my 13 year old self.  They teased the hell out of me. But it didn’t matter.  I knew it could work.  We even collectively wrote a poem about it, which I’ve included below. This year I turned 53; the same age Christopher Lee was when my 13 year old self developed such a crush on him.  It seems funny (ironic) to me now that back then I thought 53 was OLD.  Like, ‘you’re gonna die in a few years, old man!’ old.  Now it seems impossibly young (I’m not middle-aged, NOOOOO!)!!

At any rate… the poem. And forgive me, Christopher Lee, for sending you to hell  ’cause I don’t really believe in it anyway and also, you would never go there ’cause you brought so much happiness to so many people. It’s just that it rhymed, y’know?)

Christopher Lee is 56.
He’s sick but nothing we can’t fix

Christopher Lee is 57.
Now he’s on his way to heaven.

Christopher Lee is 58.
He’s knocking at the pearly gates.

Christopher Lee is 59.
He’s meeting with the one divine

Christopher Lee is 60… well…
Now he’s on his way to hell.

When I found out Christopher Lee had passed away, I cried, the first time I’d actually shed tears over the death of a celebrity.  I realized how much of a benign influence this man had on my life, his charisma and roles helping to shape the paths I took and the interests that became passions, such as sword fighting, the horror genre and… well, men in cavalier garb.  He was a vital, talented man until the end and he will always be my very first love, even if he never knew it.  🙂

Pogeen came to us when she was a month old, and already afflicted with a bad case of demodectic mange and an inverse proportion of sweetheart personality to go with it. Our cat Buddha was maybe a year old tops at the time, and afraid of nothing.  Buddha would ride our vacuum cleaner when it was on. He’d attack the steam cleaner, swatting at the water running through the tubes. So while the other cats took a while to adjust to a canine kid in their midst, Buddha embraced his new sibling, alternatively wrestling with her and cuddling her.  Three years later?  Well, this picture speaks for itself. 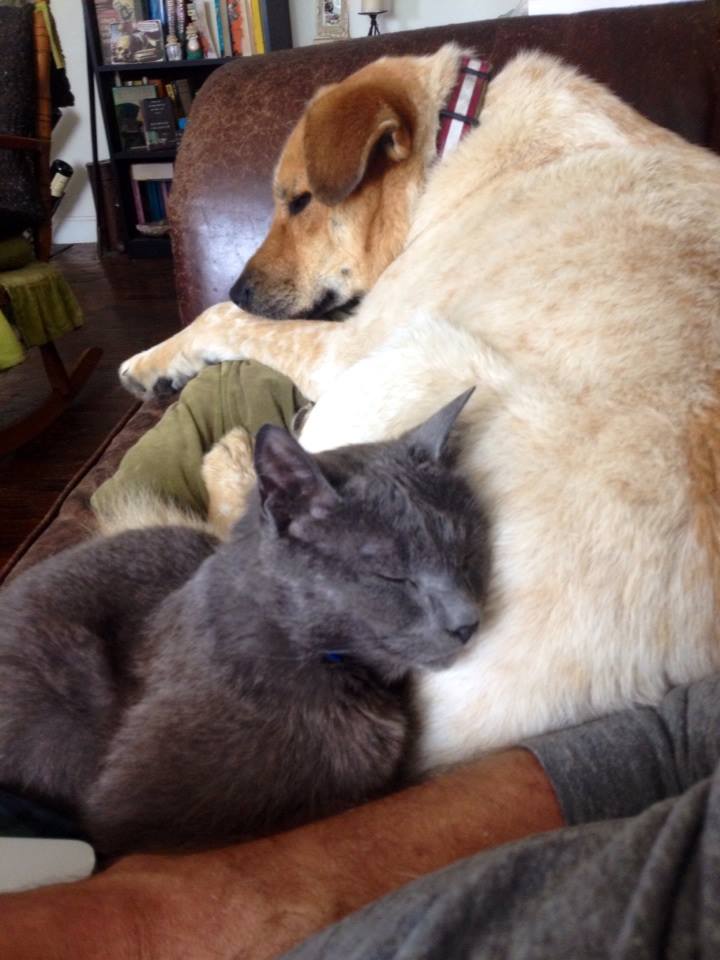 So I was lucky enough to meet Charlaine Harris at World Horror Con/Stoker Awards 2015 in Atlanta.  I’ve always heard about what a lovely and gracious person she is from the folks at one of my favorite indie bookstores, Mysterious Galaxy in San Diego, so I gathered up my courage and introduced myself at the hotel bar (writers really do congregate at the bar at conferences) Saturday night.  She was indeed really nice and down-to-earth. There’s nothing better than finding out that an author whose work you’ve always admired and enjoyed is as enjoyable as their writing!  And just in case there’s someone reading my blog that hasn’t read her Sookie Stackhouse novels, you might recognize the television series adaptation TRUE BLOOD.

Even cooler was the fact that Ms. Harris (okay, Charlaine!) bought one of my books and asked me to autograph it the next day.  Geek fan girl SQUEEEE here.  Very loud SQUEEEE.  The type that makes my cats bolt out of the room.

And even COOLER cooler than that?  I was checking my email the other day and saw one with the subject header: Out of Date!  At first I though it was one of the many political/environmental activist/petition/donation type emails I get (you sign one petition, you are on their lists for life). They tend to use catchy/casual subject headers so you think you’re getting email from friends or family.  I’m glad I didn’t delete this one before reading it because it was from Charlaine (okay, Ms. Harris), telling me she’d checked out my website to see what I was up to and found it…er.. well, two years out of date.  And that she’d enjoyed my Ashley Parker series and read all three.  She even mentioned them in her blog, which … well…  seriously, it’s like being a mystery writer and having Sue Grafton praise your work.  Or a horror writer and having Stephen King say “Well done!”

But then there was the pesky matter of my out of date website.  My web designer, the awesome Leslie Keats, had even updated it to a platform (or whatever the word is I’m looking for here) that would enable me to do revisions myself. Easy peasy.  She did this…er…two years ago.  My excuse for not getting right on it?  Fear of technology, I suppose.  I hate having more than one television remote to deal with.

How long did it take me to update at least the essentials once I found my user name/password in my email folders?  Less than a half hour.  I am both relieved and embarrassed and probably way too proud of myself for getting it done so quickly and painlessly.

“Will you marry me?”

So… thank you, Charlaine Harris, for your graciousness when I went all fan girl on you at WHC (I like this picture – it looks like I’m proposing to you); for taking the time to read and then post about my books;, and for that much needed kick in the butt to update my website!