Out of the spotlight, in the darker corners of the studio backlots, Hollywood hides a remarkable secret. Actor or actress, set designer, electrician, best boy, or grip—in la-la land, it pays not to be human. Vampires, succubae, trolls, elementals, goblins—studios hire anyone and anything that can take direction, be discreet, and not eat the extras. (The less you know about your agent, the better.)

Though only human, stuntwoman and struggling actress Lee Striga is a member of the legendary Katz Stunt Crew. They’re the best in the biz, in part because they can fly, and boast superhuman strength.

When Lee lands a job on the movie Pale Dreamer, however, not everyone is following the script. It’s up to her to figure out who—or what—is killing the cast and crew. Especially when Lee goes from stuntwoman to lead role… and the next target.

Click here to buy from your favorite independent bookseller

Death and Tattoos in the Big Easy!

Having killed her last producer (SO not her fault, though), stuntwoman Lee Striga’s next film shoot takes her to the voodoo-soaked bayous and haunted back alleys of New Orleans, where sinister supernatural figures stalk the streets. In a dark corner of the French Quarter, an arcane tattoo artist is using his clients in rituals that will open an inter-dimensional gateway for a demon god from beyond the stars.

Click here to buy from your favorite indie bookstore 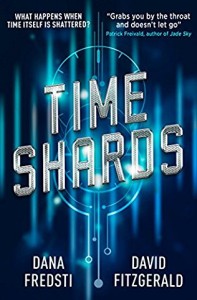 It’s called “The Event,” an unimaginable cataclysm that shatters 600 million years of the earth’s timeline.

Our world is gone, instantly replaced by a new one made of scattered remnants of the past, present, and future, dropped alongside one another in a patchwork of “shards”. Monsters from Jurassic prehistory, ancient armies, and high-tech robots all coexist in this deadly post-apocalyptic landscape.

A desperate group of survivors sets out to locate the source of the disaster. They include 21st century Californian Amber Richardson, Cam, a young Celtic warrior from Roman Britannia, Alex Brice, a policewoman from 1985, and Blake, a British soldier from World War II. With other refugees from across time, they must learn the truth behind the Event, if they are to survive.

Click here to buy the audiobook – narrated by Aaron Shedlock

“Grabs you by the throat and doesn’t let go.”–Patrick Freivald, author of Jade Sky

“Smart, visceral…and by far the most creative novel I’ve had the pleasure to read this year. This book had me tearing through the pages.”–Mark Wilson, author of the dEaDINBURGH series 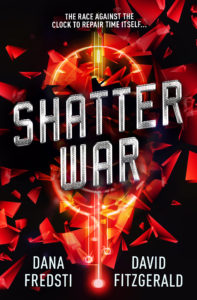 Time shatters into shards of the past, present, and future. A group of survivors dodges threats from across history to locate the source and repair the damage before it’s too late.

A group of unintended heroes forms, including San Diego native Amber Richardson, 1880s reporter Nellie Bly, a young warrior from Roman Britannia, a Victorian scoundrel, and a World War II commando. This ragtag team of survivors joins “Merlin,” a mysterious figure who may be their only hope to save the world–if he is who he claims to be. When their 23rd century ship the Vanuatu is sabotaged by an unknown enemy and thrown far off its course, the team quickly finds itself torn apart… 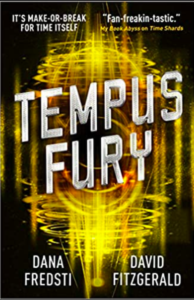 When time shatters, the survivors must fight their way to the ends of the Earth before it’s too late.

They call it “the Event”—an unimaginable cataclysm that renders 600 million years of the world’s timeline into jumbled fragments. Our Earth is gone, instantly replaced by a new one made of fractured remnants of the past, present, and future. All exist alongside one another in a nightmare patchwork of “time shards”—some hundreds of miles long, and others no more than a few feet across.

With surprising help from throughout history, an American girl and her companions first must save ancient Alexandria, the last bastion of civilization, from a panzer tank invasion. Then they will face the ultimate challenge at the end of the world… the shatterfield.

Crossing it sends them on a final quest spanning time, space, and dimensions. Only then will they learn if their mission will save their world—or destroy it.

Click here to order from your favorite indie bookseller

Ashley was just trying to get through a tough day when the world turned upside down. A terrifying virus appears, quickly becoming a pandemic that leaves its victims, not dead, but far worse. Attacked by zombies, Ashley discovers that she is a ‘Wild-Card’ — immune to the virus — and she is recruited to fight back and try to control the outbreak. It’s Buffy meets the Walking Dead in a rapid-fire zombie adventure! 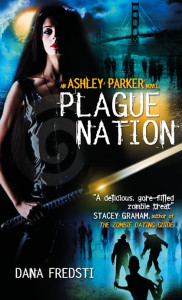 Having stopped the wave of the undead that swarmed their facility, Ashley Parker and the other wild cards (those immune to the zombie virus) are assaulted by an unknown enemy and forced to travel to a secret laboratory in San Francisco.

En route some are killed, while others are kidnapped by their shadowy foe, who seems to use the zombies as a weapon. But the worst is yet to come, as the plague begins to manifest in key locations nationwide. And the truth begins to emerge about the paramilitary society, the Dolofónoi tou Zontanoús Nekroús (DZN). 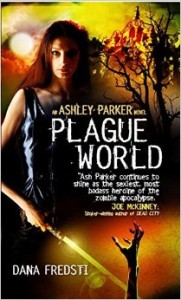 The thrilling conclusion of the zombie apocalypse begun in PLAGUE TOWN and continued in PLAGUE NATION! The zombie plague has gone airborne, and the conspiracy that began it all reaches the boiling point.

Having been ambushed in San Francisco, which is now fully engulfed in the zombie plague, Ashley and the wild cards must pursue the enemy to San Diego. There they will discover a splinter of their own organization, the Dolofónoi tou Zontanoús Nekroús, which seeks to weaponize the plague. But that isn’t the worst news. The plague has gone airborne, making it transferable without physical contact. It cannot be controlled by anyone, so reports of the zombie swarm are coming in from across the United States – and across the world.

For editorial reviews of the Ashley Parker series, go here 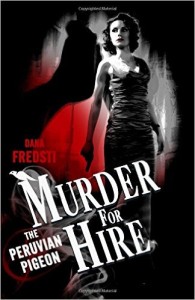 Connie Garrett knows that a trenchcoat and a fedora don’t make a detective. She’s the co-founder of Murder for Hire, an acting troupe that specializes in spoofing, not sleuthing. When MFH performs at a sleepy coastal community’s mystery gala, celebrating the works of a famous hard-boiled mystery writer, the bodies start stacking up, and Connie finds herself on the case whether she likes it or not. Now Connie is committed to solving the murders while trying to keep both the show–and her love life-afloat.

Murder For Hire was started many years ago (more years than my vanity cares to calculate) by my best friend, Maureen Anderson and me.  Maureen and I met at Clairemont High (the ‘stunt double’ high school for Ridgement in the book and movie FAST TIMES AT RIDGEMONT HIGH) and discovered we shared a love of Daphne Du Maurier’s gothics, Gene Kelly movies, Betsy/Tacy books, fresh baked chocolate chip cookies, and cocoa, and, of course, mysteries. (More…)

For other writing projects and more on my sordid past as an actress, go here!