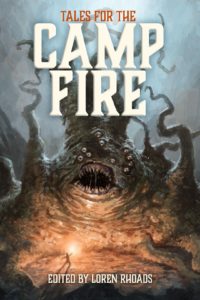 TALES FOR THE CAMPFIRE – A Charity Anthology Benefiting Wildfire Relief

So proud to be a part of this anthology!

Scary Stories for a Good Cause. From Bram Stoker Award-nominated editor of the cult magazine Morbid Curiosity comes Tales for the Camp Fire, a new charity anthology of short stories to help support wildfire relief efforts.

Through these pages roam werewolves, serial killers, a handful of ghosts, plenty of zombies, Cthulhu cultists, mad scientists, and a pair of conjoined twins.

In November 2018, fire broke out on Camp Creek Road and raced through Butte County, California. By the time the fire was extinguished, the town of Paradise had been scoured from the map. Nearly 100 people died. Damage ran to an estimated $16 billion. The disaster has been named the Camp Fire, in memory of its place of origin. The horror writers of Northern California rallied to raise money for the survivors.

Tales for the Camp Fire ranges from fairytale to science fiction, from psychological terror to magical realism, from splatterpunk to black humor, all rounded out by a messed-up post-apocalyptic cookbook. All profits from the sale of this anthology will be donated to Camp Fire relief and recovery efforts. 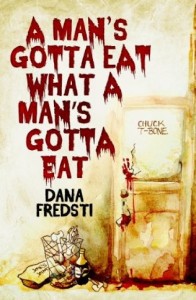 Chuck T-Bone is a private detective—A P.I. A gumshoe. A dick.He also happens to be a zombie, in a world where the zombies have taken over, and “fresh meat” is a rare commodity. Where you go into a diner to order an elbow joint with a side of toes. But nothing’s really changed—the rich get richer, the poor get poorer, at least until they fall apart altogether.When a curvaceous member of a famous crime family walks into his office, he’s forced to reopen a case he’d just as soon forget. It’s the one that introduced him to the dame who stole his heart—and got him killed. Trouble is, if it happens again, this time it’s for good.It’s gory goodness for fans of The Big Sleep and Shaun of the Dead, with a dash of Zombieland thrown in for good measure.

“A fun, hard-boiled zombie story with tongue firmly planted in rotted cheek, A Man’s Gotta Eat is perfect for Halloween.” —Stephen Blackmoore, author of Dead Things“L.A. is a mighty strange place, but it’s even stranger when seen through the eyes of the dead; and that’s just what Dana Fredsti’s done for us in A Man’s Gotta Eat What a Man’s Gotta Eat. Fredsti’s humor, her dark, dark humor, is on fine display in this zombie noir novella featuring a private detective with a healthy appetite for revenge. There were times I nearly split my sides with laughter, and others I just sat there shaking my head in stunned appreciation for Fredsti’s storytelling talents. Sometimes I found myself doing both at the same time. This is a writer who knows her craft. Read this and tell me you don’t agree. I dare you!” —Joe McKinney, Bram Stoker Award-winning author of The Savage Dead and Dead CityDana Fredsti’s A Man’s Gotta Eat What a Man’s Gotta Eat is a wickedly entertaining serving of zombie noir. With this novella, Fredsti had created a blood-and-guts stew of humorous hardboiled horror that will make you laugh and cringe at the same time. Don’t miss it!” —Tim Waggoner, author of the Nekropolis series 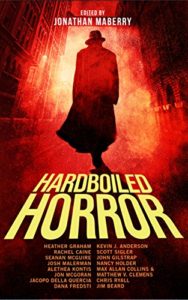 There’s something out there in the dark.

There’s always something reaching for you.

Hardboiled Horror collects fifteen original tales of noir mystery shot through with elements of horror and the supernatural. Occult detectives, paranormal investigators, seedy P.I.s, amateur sleuths and ghost hunters tackle the cases no one else can handle. 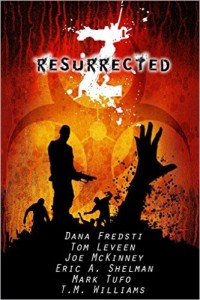 In this anthology, six horror authors revisit some of their most infamous zombie characters, resurrecting the undead.

Contributing authors to Z Resurrected are some of horror’s best, who have each carved a distinct path in the world of zombies: Dana Fredsti, Tom Leveen, Joe McKinney, Eric A. Shelman, Mark Tufo, and T.M. Williams.

NOTE: My story Pinky Swear is now available as a standalone eBook! Join Ashley, Griff, and JT as they go on a dubious rescue mission across San Francisco. The story takes place shortly after the events of Plague World. 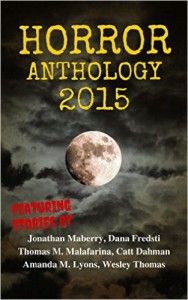 The best and brightest in independent horror, collected here and now for your reading pleasure!

Note: My story, You’ll Never Be Lunch in This Town Again, follows a first time director as he tries to finish his masterpiece during a zombie outbreak. First published in Mondo Zombie (Cemetery Dance).