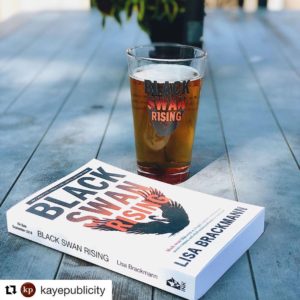 Black Swan Rising is a little (okay, a lot) too close to reality to be an easy or comforting read, but it’s worth the discomfort. Set in the midst of a congressional campaign in San Diego (my hometown), it’s fast-paced, tense and shines a harsh light on mass shootings and misogyny. Characters are real, in both their strengths and their flaws. I read it pretty much in one sitting.

The book also features the ever-expanding craft beer scene in San Diego, so if you’re a beer drinker I suggest you have some good stuff on hand to enjoy while you’re reading Black Swan Rising ’cause you’ll be craving it!

“Riveting thriller…Readers will furiously turn the pages to see how it all ends.”—Publishers Weekly

“An absorbing and apocalyptic vision of American politics that leaves the reader hoping it will never come to this.”—Booklist

“Lisa Brackmann’s Black Swan Rising is a savvy, riveting thriller that’s also deeply human, with characters who are as authentic as they are compelling.”—Lou Berney, Edgar Award–winning author of The Long and Faraway Gone

Charlaine Harris.  She has four different series out and I’ve methodically and far too quickly worked my way through three of them:  the Sookie Stackhouse Southern Vampire supernatural romance/mystery/action series; the Lily Bard mystery series;  and the Harper Connelly paranormal mystery series.  Damn, this woman can write.

The first Charlaine Harris book I saw was one of the Southern Vampire series–the second one, I think–and I didn’t pick it up because I wasn’t drawn to the cover art, which seemed a bit twee. But Patrick at Mysterious Galaxy Bookstore told me I needed to read it, and once again the old adage ‘never judge a book by its cover’ was proved true because the series is anything but twee.  The books are funny, action-packed, sexy and suspenseful.

The other two series are also suspenseful, sexy and original.  Harper Connelly can find dead bodies and sees the last moments of their lives, giving her a unique job skill and exposing her to a lot of deathbed horrors.  AN ICE COLD GRAVE, the latest in the series, was disturbing as hell, but the author understands the effectiveness of subtle horror instead of rubbing her readers’ faces in gore.

And the Lily Bard books are just damn good mysteries.  I love the heroine (I’m not gonna go into details because discovering her past is part of the draw of the first book) and all the auxiliary characters as well.  Charlaine Harris is just a damn good writer and I’m looking forward to reading her Prime Crime series.