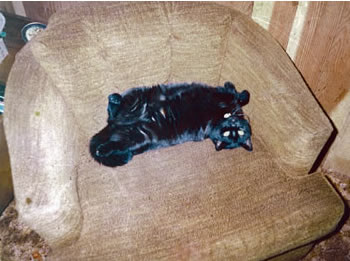 This was the original link to my blog, named Zhadi’s Den.I don’t have the heart to take the page down ’cause I love this picture so much.

This is Zhadi (short for Scheherazhade, from Tales of the Arabian Nights), my first cat after moving away from my parents’ house. I named her Scheherazhade because she wouldn’t stop talking the first few nights after I brought her home.

Zhadi was a cat for those who did not like cats – she charmed the uncharmable. She died of throat cancer when she was 11 years old and I still miss her. In honor of her memory. I took Zhadi as my screenname. If Zhadi were still alive, she’d be the first to greet you at the door of Zhadi’s Den with a purr, a head butt and a drop and roll so you could rub her very fat belly.