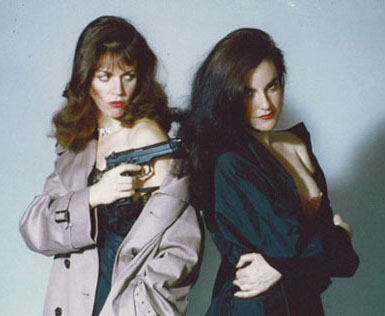 Murder for Hire was started many years ago (more years than my vanity cares to calculate) by my best friend, Maureen Anderson and me.   Maureen and I met at Clairemont High (the ‘stunt double’ high school for Ridgement in the book and movie FAST TIMES AT RIDGEMONT HIGH) and discovered we shared a love of Daphne Du Maurier’s gothics, Gene Kelly movies, Betsy/Tacy books, fresh baked chocolate chip cookies and cocoa, and, of course, mysteries.

Our first unofficial Murder for Hire show was a self-styled ‘mystery fashion show’ for the San Diego Mystery Club, of which we were both members.  They were showing MURDER AHOY with Margaret Rutherford at the Old Town Opera House and we though it would be fun to do a pre-show.  I don’t really remember how or why we came up with the idea (we were probably jacked up on sugar and chocolate), but it seemed like a fine plan to do a gothic and hard-boiled mystery fashion show, which would include a fashion ‘catwalk’ describing the outfits and then a short vignette of each genre.  We wrote THE WET LAKE and THE PERUVIAN PIGEON, as well as the fashion commentary for each, in the space of an evening.

Did I mention we operated on repeated sugar highs?

Despite technical difficulties, the fashion show was a success and Murder for Hire was officially (if amateurishly) launched.  We were soon approached by the SD Mystery Club to do another show.   We auditioned with five-minute skits of three different genres: hard-boiled, gothic, and English drawing room murder.  Hard-boiled film noir won the day and the first full-length version of our signature piece, THE PERUVIAN PIGEON, was performed at a ‘30s apartment building in Hillcrest.

MFH branched out into other shows, including a ‘scavenger hunt’ for a luau themed birthday party.   We were hired to dress as the cast from Gilligan’s Island (Maureen got to be Ginger, based on her bigger cup size, while I was stuck with Mary-Ann, complete with pig-tails) and kidnap the birthday boy, leaving a series of clues for the guests to find and track him down.   `

What can I say, we got paid for it.

MFH’s big break came when we were hired to entertain at the first Raymond Chandler Festival in La Jolla, instigated to celebrate the opening of the new branch of the La Jolla Library.   We did the PERUVIAN PIGEON at the Charity gala dinner and formed scenes from Chandler’s novel PLAYBACK, which was set in Esmerelda, Chandler’s fictional version of La Jolla,

Not only did we get other gigs from this show (entertainment for the Erle Stanley Gardner Festival, a roast for attorney Milt Silverman, and another mobile show, THE BIG SNOOZE, set in the mean streets of La Jolla), but the events that occurred during the rehearsals and performances of the Chandler Festival inspired the first draft of MURDER FOR HIRE: THE PERUVIAN PIGEON.

Other performances included:  a traveling mystery on Molly the Trolley, with the various cast members picked up along the way (big game hunter at the San Diego Zoo, our detective in front of the courthouse, etc) to a restaurant (where one of our actors was almost arrested for ‘lurking’ outside);  an all expenses paid trip to Naples, Florida (home of the infamous Operation Jolson, an ill-advised undercover police operation in which the officers wore black-faced makeup to infiltrate a drug ring) to perform the PERUVIAN PIGEON for a corporate event at an antique auto museum; and a short run of the PERUVIAN PIGEON at the Insomniac, a coffee house in downtown San Diego.    Each show comes with its own cache of behind-the-scenes stories and if I have my way, they’ll end up as fodder for another MURDER FOR HIRE mystery!

< Back to Books by Dana Fredsti

Murder For Hire: The Peruvian Pigeon is available through all fine bookstores in the US and Uk, on-line through Amazon.com, barnesandnoble.com and other internet sites.