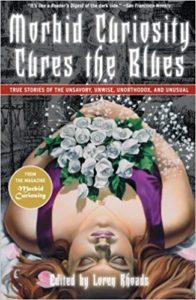 Hell on Heels, an essay in MORBID CURIOSITY CURES THE BLUES:

For ten years, Morbid Curiosity was a one-of-a-kind underground magazine that gained a devoted following for its celebration of absurd, grotesque, and unusual tales — all true — submitted from contributors around the country and across the world. Loren Rhoads, creator and editor of the magazine, has compiled some of her favorite stories from all ten issues in this sometimes shocking, occasionally gruesome, always fascinating anthology.

This quirky book is filled with tales from ordinary people — who just happen to have eccentric, peculiar interests. Ranging from the outrageous (attending a Black Mass, fishing bodies out of San Francisco Bay, making fake snuff films) to the more “mundane” (visiting a torture museum, tracking real vampires through San Francisco), this curiously enjoyable collection of stories, complete with illustrations and informative asides, will entertain and haunt readers long after the final page is turned.

Click here to read several other essays published in past issues of Morbid Curiosity.

One of my favorite stories, YOU’LL NEVER BE LUNCH IN THIS TOWN AGAIN, was published in MONDO ZOMBIE. MZ (yes, I do love my acronyms) was the long awaited sequel to BOOK OF THE DEAD and BOOK OF THE DEAD TWO: STILL DEAD, both edited by John Skipp and Craig Spector (authors of some great horror novels such as THE BRIDGE, THE SCREAM, LIGHT AT THE END, DEAD LINES and THE CLEAN UP).

Both books are anthologies based (some stories more loosely than others) on the flesh-eating zombie-infested universe created by George Romero with his ground-breaking movie NIGHT OF THE LIVING DEAD, released in 1968 (more on this and other zombie movies on the Get a Slant page). MONDO ZOMBIE is set in the same universe, edited by John Skipp. I guess Spector skipped town. Heh.

My first published short fiction story was in Cat Fantastic IV, edited by world famous sci-fi and fantasy author Andre Norton. The story, PROFESSOR PURR’S ALLERGY CURE, was co-written with Brad Linaweaver, author of the award-winning novel, MOON OF ICE (and much more!). If you’re a fan of the videogame DOOM, check out the novelizations by Brad and his co-writer, Dafydd ab Hugh.

One of the projects I’m proudest of is my work as co-writer and associate producer on URBAN RESCUERS, a documentary about feral cats and the TNR (Trap, neuter, return) program. As an animal lover and someone whose found homes for over a baker’s dozen of kittens and cats, this project holds a special meaning for me. To quote the official synopsis by writer and producer Nikki Corda:

Astonishingly, nearly 4 million stray or feral cats inhabit the streets, parks, back alleys and backyards of Los Angeles County, and they are reproducing at an alarming rate. The current solution is round-up and kill. But is there a better way? Urban Rescuers profiles a group of fiercely dedicated animal welfare crusaders in Los Angeles who skirt the law in order to rescue feral cats from the certain death they face upon landing in animal shelters. The methodology involves a controversial solution for feral cats known as “TNR” (trap, neuter, return), which calls for sterilizing these animals and then allowing them to live out their lives in the wild.

As the TNR process is revealed, passionate and surprising arguments on both sides of the issue are heard from the heads of PETA (People for the Ethical Treatment of Animals), the Feral Cat Alliance, the Los Angeles SPCA, and the Los Angeles Department of Animal Regulation, among others. The documentary shows that TNR is legal in other communities where it works efficiently, within the system. As we investigate, Los Angeles officials are asked to adopt the policy. Urban Rescuers is a thought-provoking journey of ethics, featuring big personalities and stunning footage of feral cats in Southern California.

For more information, check out the website at the link above!

Like at least 50 percent of the population, I’ve written a few screenplays, both by myself and with partners. I’ve been lucky in that I’ve had a few optioned and two produced.   The experiences I’ve had in the wonderful world of the film industry (oh, excuse me, that should really just be The Industry) make watching movies like THE BIG PICTURE, PLAYER and SWIMMING WITH SHARKS, as well as shows like ACTION and THE BUSINESS both highly amusing and REALLY painful at times.  Anyway, check ‘em out if you’re interested!

Click here to read about my jaded past as an actress.