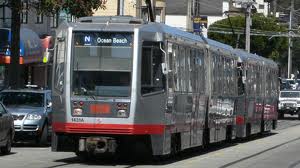 This is your average San Francisco Muni train.  Doesn’t it look nice and normal?  Yeah, I think so too.  But you never know what you’re going to get when you board one of the trains or buses on your daily commute.  Sometimes you get a seat and have a quiet commute, your fellow passengers all minding their own business as people read, chat quietly, stare into space, or sometimes sleep (yes, there is occasional drool on the window).

Other times, however, you’ll board at a stop well into the route and end up squashed like a very unlucky sardine against your fellow passengers, backpacks shoved against your back, shoulder or chest (why do people who wear backpacks always seem to forget they’re wearing them and therefore taking up more footage than normal?), or the victim of a variety of crimes against hygiene. or an overdose of perfume and/or cologne that would be better used as bug spray. And let’s not forget the people who play their iPods at a level that makes earbuds irrelevant.

And then there are the crazies and/or the drunks.  The ones that smell like Miller Time or worse don’t always just come out in the late afternoon or evening. I’ve been stuck next to people who smell like the floor of a brewery first thing in the morning.  Before I’ve had coffee.  This is wrong on many levels.

We have Tourette’s Guy as a regular on the L-Taravel line (the line that runs two blocks from our house) and he not only has Tourette’s, but likes to use it as a weapon against whoever happens to catch his eye on the train.  He eavesdrops on conversations and works snippets of them into his rants, liberally peppered with obscenities.  He likes to pick on women. He’s yet to choose me as a target, which shows some amount of survival instinct.

There’s  one man who likes to sing.  Loudly.  Non-stop. Unfortunately he’s also tone-deaf. Luckily he also likes to share the joy of song with everyone on the train, which means he’ll move from car to car.  He makes me reconsider my own lack of interest in owning an iPod.

This morning we were joined by a fellow with a definite lack of personal hygiene and a love of communicating with his fellow passengers.   First words out of his mouth when he bounded up the stairs were,  “Brrrrrr!  It’s cold out there!…I once had a really fat girlfriend …  375 pounds …  Her name was Loony.  She kept me warm all night long, I tell ya.  Best lay I ever had, that’s for damn sure!”   He punctuated this with a merry cackle “Heheheheheheheheeee!”  He asked a little gal with a violin case if she really played violin or “you got a weapon in there?  An AK-37? Rifle? Pistol?  Heheheheheheheee!”  Then he asked if anyone knew Tip Toe Through the Tulips and proceeded to sing it for us.  He was actually pitch perfect.

Ah, Muni.  You are many things, but never boring…